Somesh Renganathan Published 4/22/2018
Please Enter below the LTP (after 9.30 a.m) of the NSE/BSE Nifty or any Index or Stock script for which you need to calculate Intraday Resistance and Support levels as well as Stock Targets and Stoploss recommendation based on Gann's Square of Nine method. Also see below Casestudy if you want to know how it worked for me.

The Gann's calculated Resistance and Support levels for the provided LTP value above is as given below for Intraday only.

You can use the below Gann's Recommended Targets and Stoploss for the stock/Index for Intraday only.

I checked for the LTP as on 9:35 am and found it to be 458.05 and entered the same in above Gann Square of Nine Intraday Calculator. 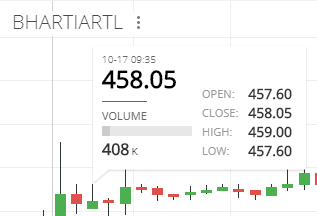 As soon as I entered the LTP, I got Resistance and Support levels, and as well as the Target and Stoploss Recommendation also. 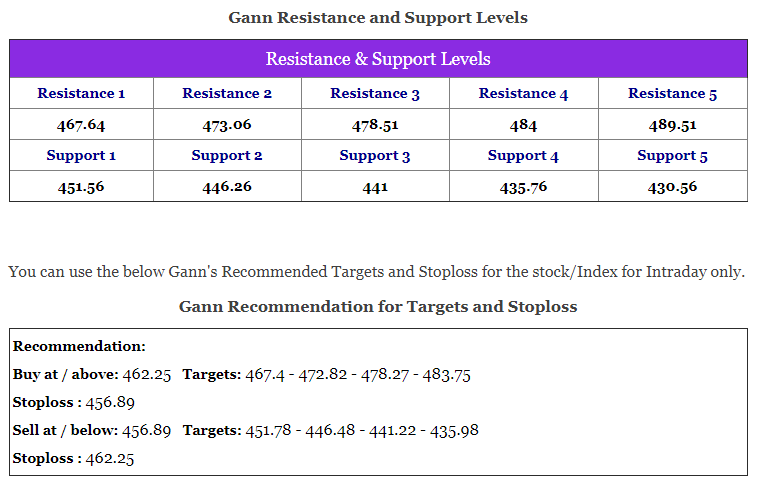 As for the day, Open and Low was same, I did not want to short the stock and waited for it to break the 462.25 levels, so that I can enter to buy the stock.

The first target was given as 467.4 as per the above Gann Square of Nine method and it was achieved at around 2:45 pm as the scrip went upto 469 levels. As the first target was achieved, the stop loss order was re modified as 467.4 and waited for next Target 472.82. But, within few minutes, it came back to 467.25 and triggered the stop loss order and the scrip was sold at  467.4 levels. 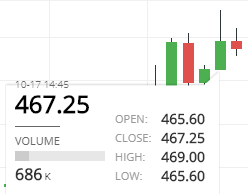 Totally, The trade made a profit of Rs.450+ following the Gann's square of Nine method for Intraday. 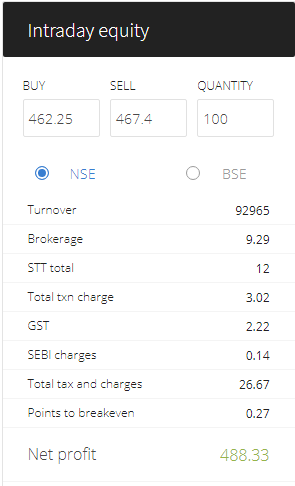 Thus, you could see from the above case study that, The target as suggested by Gann's square of Nine method worked. But let me make you clear you with some details on how you could have lost money in this trade.

*You could have shorted at the 456.89 once it went below it. As I was sure that it will increase due to open and low are same, I did not short it.

*Once it reached the Target1, the stoploss order was re modified. If it was not done in a timely manner, you could have lost profits, since the stock came down from top within few minutes.

Finally, I want to suggest is that, Gann Square of Nine method is a profitable method if and only if you are clear with the direction in which the stock moves and you are quick enough to trade according to the situation and handle it properly. This method is just like a torch light in a dark cave. All the risk must be borne by you before you implement or use the above method.